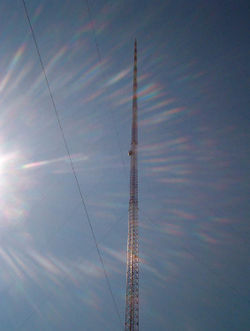 The tallest standing structure is the KVLY-TV mast near Fargo, North Dakota United States, at 628.8 m (2,063 ft). It is a transmission antenna, consisting of a bare metal structure supported by guy-wires. The Warsaw radio mast at Gabin-Konstantynow near Warsaw, Poland at 646.4 m (2,121 ft) was taller, but it collapsed on 8 August 1991.

These transmission antennas are not usually included with the world's tallest buildings because they are not self-supporting. Another example of a structure that is not self-supporting is a moored balloon, a long rope tethering a helium balloon to the ground. If structures that are not self-supporting were counted, such balloons would be the tallest in the world. Guyed masts, however, are designed for permanent use and cannot be dismantled quickly. For example, in case of bad weather, a captive balloon can be released and moved to a different location, but a transmission antenna must be able to withstand the weather and remain standing. Therefore they are considered architectural structures, just like other non-inhabitable constructions. 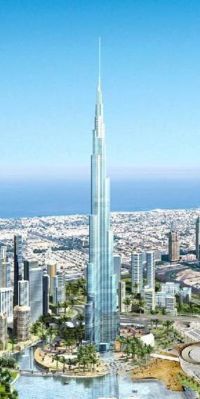 When Burj Dubai is completed, it will be the tallest building and architectural structure in the world at more than 800 meters (2625